Nursing Center of Excellence in Palliative Care for the Central Eastern European Region: aims to improve end of life care through development of professional and leadership capacities in palliative care for nurses and allied healthcare professionals from Romania, Central- Eastern Europe and empowering patients with life threatening illnesses and their families through information and education.

In 2011 Hospice Casa Sperantei received an Award of Excellence from the End-of-Life-Nursing-Education program run by City of Hope, Beckman Research Institute and the American Association of Colleges of Nursing USA, in recognition of 18 years providing educational programs 9 since 1997) and particularly for the national and international input in developing palliative care nursing. The experience  and quality of education provided by the trainers from Hospice Casa Sperantei and the reports of over 6500 nurses , from Romania and 18 other countries, makes the organization an excellent coordinator for  a regional project Centre of Excellence in Palliative Care Nursing for Central and Eastern Europe.

Since 2010, the Bristol-Myers Squibb Foundation, through its Bridging Cancer Care™ initiative, has focused on elevating the role of nurses caring for cancer patients in the Czech Republic, Hungary, Poland, Romania and Russia. Central to this effort are three Centers of Excellence in Romania, the Czech Republic and Russia that are working to improve nursing education and enhance nurses’ capabilities in providing disease education and patient care. One of those centers is the Nursing Center of Excellence in Palliative Care for the Central and Eastern Europe Region, coordinated by HOSPICE Casa Speranței. 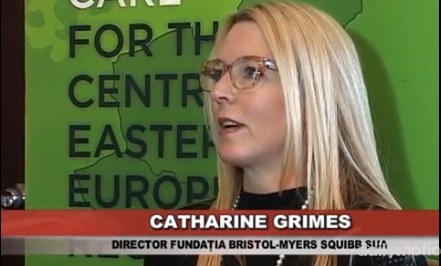 The program uses as a tool for developing leadership skills – THE PERSONAL DEVELOPMENT PLAN. Therefore the application form contain also a project submission. The project will be implemented by the applicant during the training programe. Besides the completed form applicant must send a CV and a letter of recommendation. The selection criteria will take into account the applicant’s commitment to participate fully in all phases of the training program.

The program was launched in September 2014 with a first group of 20 nurses from Albania, Armenia, Greece, Hungary, Russia, Serbia, Moldova and Romania, having as lecturers ELNEC (End of Life Nursing Education Consortium) accredited nurses, with extensive experience in palliative care, from US and Romania. The program is conducted in English and in Romanian (for applicants from Romania and Moldova) and covers the following topics: management, communication, teamwork, advocacy, according to the schedule:

The English teaching program 2015-2016 begins on September 20th, in Brasov. Can apply nurses from Central or Eastern Europe, which meet the mentioned criteria.

Graduates will receive diplomas from HOSPICE Casa Sperantei- Nursing Centre of Excellence in Palliative Care in Central and Eastern Europe.

Nurses who began the training program in English, in 2014 will continue according to the following schedule:

Graduates will receive diplomas from HOSPICE Casa Sperantei- Nursing Centre of Excellence in Palliative Care in Central and Eastern Europe.

The National Programme: Education in Palliative Care for the nursing trainers at undergraduate level

The National Programme: Infomation and Education in Palliative Care for Patient, Families and Carers

Advocacy: palliative care- a new specialty for nuses in Romania

This site requires cookies to function correctly. We need your consent for a part of these which may contain personal data. You may revoke your consent at any time by accessing the PRIVACY button visible on all pages. Below you can review a list of the types of cookies we use: